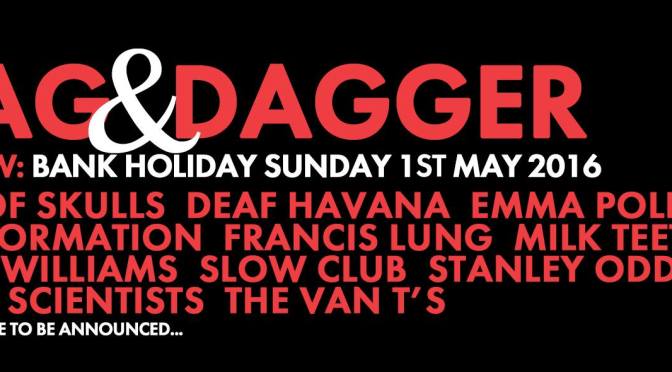 This year’s Stag and Dagger bash offered music lovers in Glasgow the possibility of seeing some of the best live music from home and abroad, without the need for the wellies or the thought of returning to a half-submerged tent, and didn’t disappoint.

With over 45 bands taking part in the annual all-dayer across 9 venues, the only tricky part was deciding where to go and when.

London trio Kenneths served up an early treat, playing their turbo-charged brand of punk rock to a packed out Nice and Sleazy’s, with dedications to Travelodge and Glasgow banter aplenty.

Next up, fresh-faced Glasgow band West Princes offered an antidote to the unwelcomed queue in the rain outside the Art School, as their hip, nonchalant, jazzy groove felt a perfect fit inside the Vic Bar, before the hotly anticipated Haelos blew everyone away with a remarkable performance upstairs in the Assembly Hall.

With a trip-hop sound that recalls Massive Attack and Portishead, Haelos certainly lived up to the hype, with Lotti Bernadout’s spellbinding vocals on the terrific ‘Dust’ a festival highlight. Bigger stages await for sure.

Following on from the Haelos high, We Are Scientists showed that, 11 years after the release of their debut ‘With Love and Squalor’ LP, they showed no signs of losing their trademark energy. Showcasing songs off new album ‘Helter Selzter’, the California based indie-rockers powered through a blistering set, with the capacity crowd in the ABC greeting old favourites ‘The Great Escape’ and ‘Nobody Move, Nobody Get Hurt’ with rampant enthusiasm.

From palm trees and sunny beaches to roundabouts, as downstairs in the ABC 2 East Kilbride five-piece The Lapelles put on a performance to continue the track record of the Glasgow suburb producing first-class music, in this case in the form of sweaty, indie-pop gems that had everyone dancing about.

With Crash Club and The Duke Spirit following them up on the same stage, two reasons as good as any were found to stave off a Sauchiehall St wander and enjoy what was on offer, and neither disappointed.

Latterly, with The Duke Spirit, singer Liela Moss was on form as the intimate surroundings played host to a mesmerising slice of alternative, garage-rock in support of new record ‘KIN’.

Meanwhile, having built up a reputation in Glasgow as the crown princes of revelry, Crash Club made their preach to an already converted public with a high octane set that shimmered with raw energy, featuring impressive guest vocals by Ian Mackinnon of Medicine Men and Tony Costello of Tijuana Bibles.

In the absence of a quiet night in a dark room to regain composure post Crash Club, Band of Skulls stadium-sized rock provided the perfect end to the day, as the Southampton trio a polished, raucous set that had the ABC 1 crowd in raptures, with Russell Marsden’s virtuoso guitar playing packing a pretty punch.