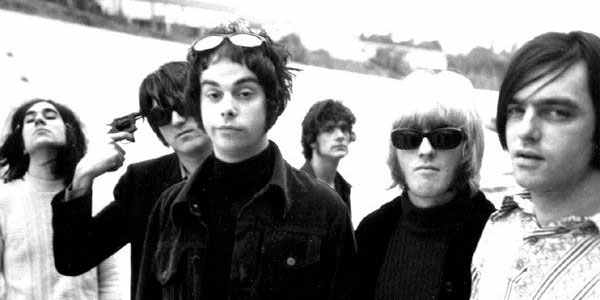 A simple mathematical equation can split the world into two: those who have and those who haven’t seen the Brian Jonestown Massacre live.

The sweltering Barrowlands seemed to levitate as the group worked their way through a quite incredible mammoth 2 hour 45 minute bursting with moments of supreme musical quality.

Front man Anton Newcombe doesn’t things by half, and, sporting white mutton cop sideburns and a hippy shirt, he gave off the feel of a cult leader preaching to his followers under the iconic square tiled Barrowlands ceiling.

Who and That Girl Suicide had the crowd going as the venue started to fill following the early 7:30 start, as the band flooded the venue with jams full of distortion and reverb, reminding fans that when Jonestown, and particularly, Newcome, stay away from freak-out eccentricities or mind bending abstract ramblings, they can nail down an impressive, wide-ranging body of work that is close to psychedelic perfection.

The fantastic Jennifer was followed by rip roaring new tune Groove is in the Heart, before Whatever Hippy Bitch – coupled with a brilliant anecdote about the song’s origin – had the crowd in raptures.

It also saw Joel Gion in fine tambourine and maraca waving form as he soaked up the energy from the animated crowd, his nonchalant on stage swagger taking centre stage as Newcombe seemed content to let the music do most of his talking.

When Jokers Attack kept things moving before Pish and Leave it Alone – both songs off their most recent release Mini Album Thingy Wingy – saw the gig reach a veritable, sedated climax, especially after Pish was cut short as Newcombe berated one of the guitarists for playing the wrong chord, as the crowd were treated to a double dose of what is without doubt one of the best tracks in their extensive repertoire.

Matched only by anthems such as Anemone and Servo, which saw the pints flying as the band took the crowd with them down their own majestic psychedelic rabbit hole.

A truly memorable gig that left no fan short changed.